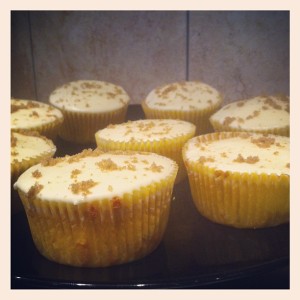 The Hummingbird Bakery is one of my favourite London food spots. I love their baked goods so much that I dragged my entire family to the South Kensington branch on the day of my graduation, dressed up in all their finery, just to get my hands on one of their cupcakes. When my long suffering boyfriend presented me with their Cupcakes and Muffins cookbook on my 21st birthday, he won such major man points he’s still practically off the scale now, nearly two years later.

These peaches and cream cupcake recipes is one of my favourite discoveries from the collection. They’re incredibly decadent and super sugary – I have a ridiculously sweet tooth and even I can only handle half at a time – but trust me, they’re totally worth the calorie splurge. Plus, they contain fruit, so you can count them as one of your 5 a day.

Preheat your oven to 170 degrees Celsius.
Add the flour, sugar, baking powder, salt and butter to a bowl and mix with an electric whisk until everything is combined (The Hummingbird Bakery describe this as a ‘sandy consistency’).
Gradually add half the milk, mixing on a slow speed until the mixture comes together.
Whisk the egg, vanilla and remaining milk in a separate bowl, and then combine with the original mixture. Stir until the batter is smooth, but do not overmix!
Cover the base of your cake cases with the drained peaches, and spoon the batter over them until the cases are two thirds full.
Bake your cupcakes in the oven for 20-25 minutes.
While the cupcakes are cooling, prepare your icing.
Beat the butter and icing sugar on a medium-slow speed until they come together.
Add the cream cheese and continue to beat until the icing becomes light and fluffy.
Be careful not to overbeat the mixture, as it can become runny – I learnt this the hard way! However, I have since had successful attempts with this method, so follow it to the letter and you should be fine (and if you have any words of wisdom, I’d be happy to hear them). 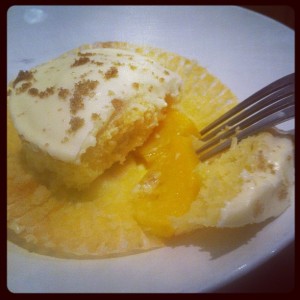